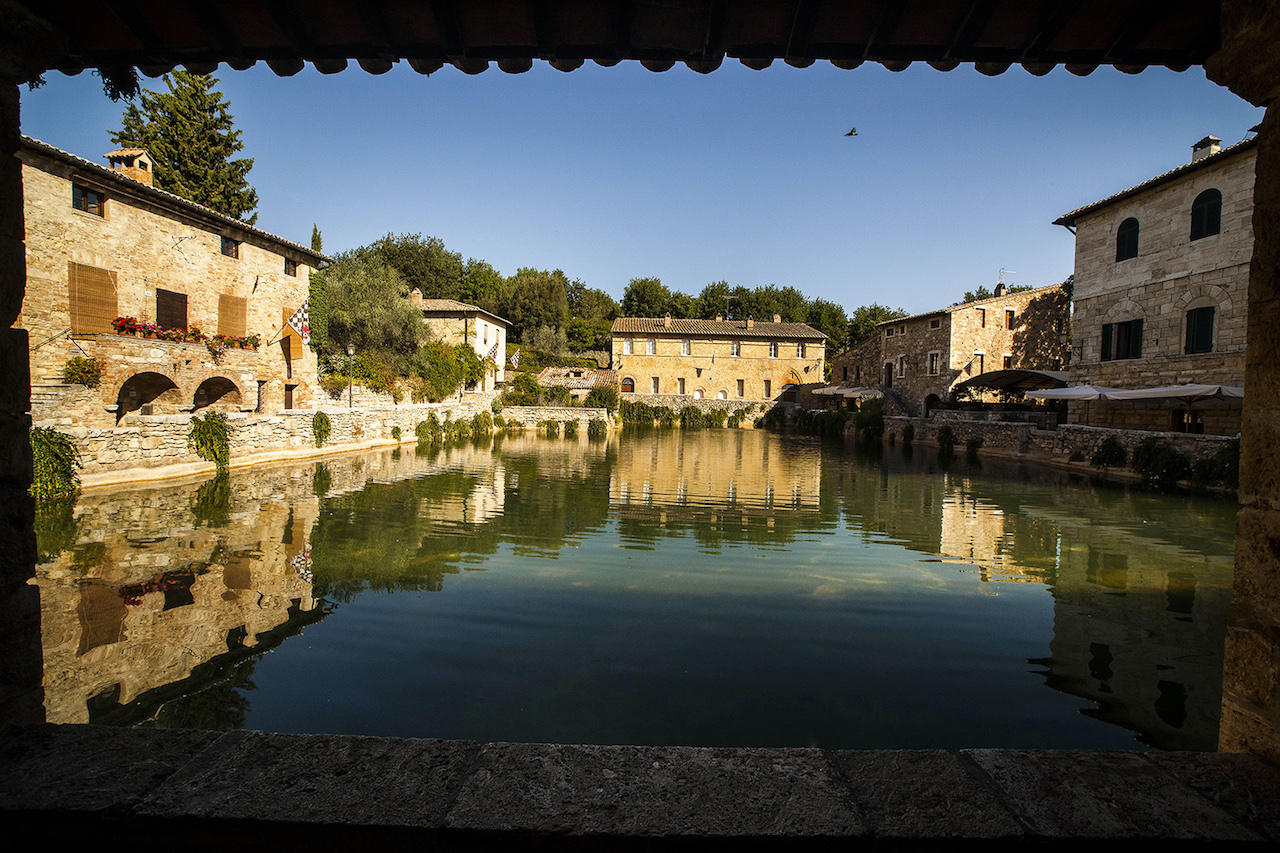 Starting from the medieval baths in the centre of the piazza, thermal waters have played an important part in the history and nature of Bagno Vignoni.

The Piazza delle Sorgenti, in the centre of Bagno Vignoni, is home to a large medieval bath, where the waters gush forth from the thermal spring and slowly smoke, creating a fairy-tale atmosphere that has enchanted travellers over the years. The bath is overlooked by the Renaissance buildings and picturesque Santa Caterina di Siena loggia, giving the piazza an air of great elegance. The waters flow towards the nearby cliff which is still home to ancient underground mills with their overflow basins, while other waters supply the thermal spas that have gradually cropped up in the little town. All immersed in a striking landscape, full of signalled pathways along which you can enjoy pleasant walks. First the Etruscans and then the Romans enjoyed spending time in Bagno Vignoni and the Romans were in fact the first to develop a social and curative idea of the waters. Evidence of past Roman baths can be found in the traces of a consecrated holy area dedicated to the waters, to the gods, to the holy “protecting nymphs of the baths” as testified by the inscription found within the thermal structure – which Lucio Trebonio Paterno placed as thanks for his newly-found good health. 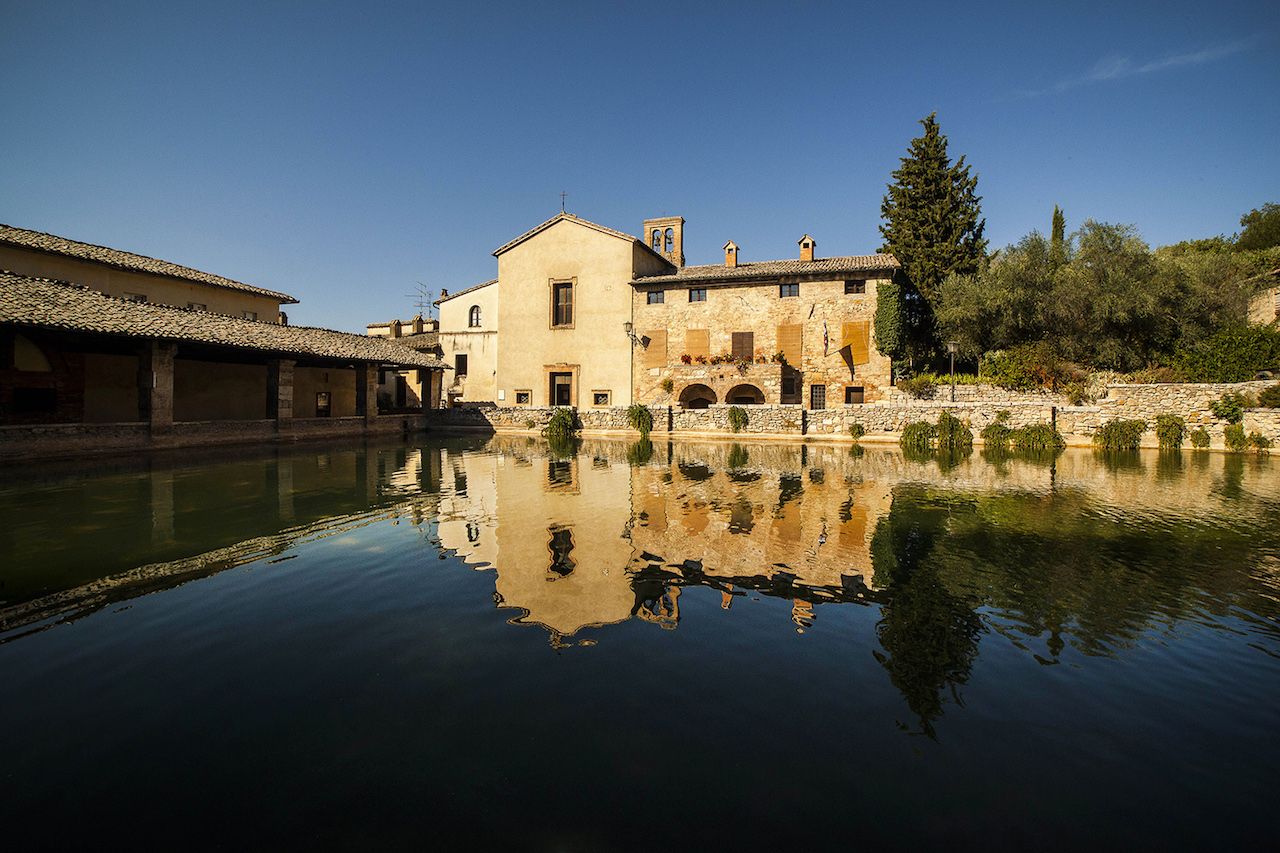 The Terme di Bagno Vignoni experienced its most important and prestigious times during the government of the Siennese state. Vast literature and numerous sources on the “Bagno di Vignoni” testify the importance of the place and therapeutic use of the waters for mud therapy treatments from as early as 1170, when Emperor Federico II awarded the feudal state to Cardinal Unifredo. Activity of the thermal structure in the Middle Ages was described by Simone di M. Iacono Tondi who wrote to the Siena magistrate in 1334. “Primarily the Bagno di Vignone, as named after the nearby Castle is settled in and surrounded by buildings and osterias and has a Chapel in the middle. It is square in shape, all beautiful, the spring is divided into two, and a roof protects from rain those who otherwise inside would get wet; but for all they are places of refuge, where men and women may bathe either hidden from sight or in the open. The waters have the virtue of iron, albumen and little copper, blended with gold and silver. They bring sustenance to the liver, spleen and stomach, moderate, and to all the members linked thereto”.

The fame enjoyed by Bagno Vignoni is further witnessed by famous persons who used to stay there and take the waters for their health. 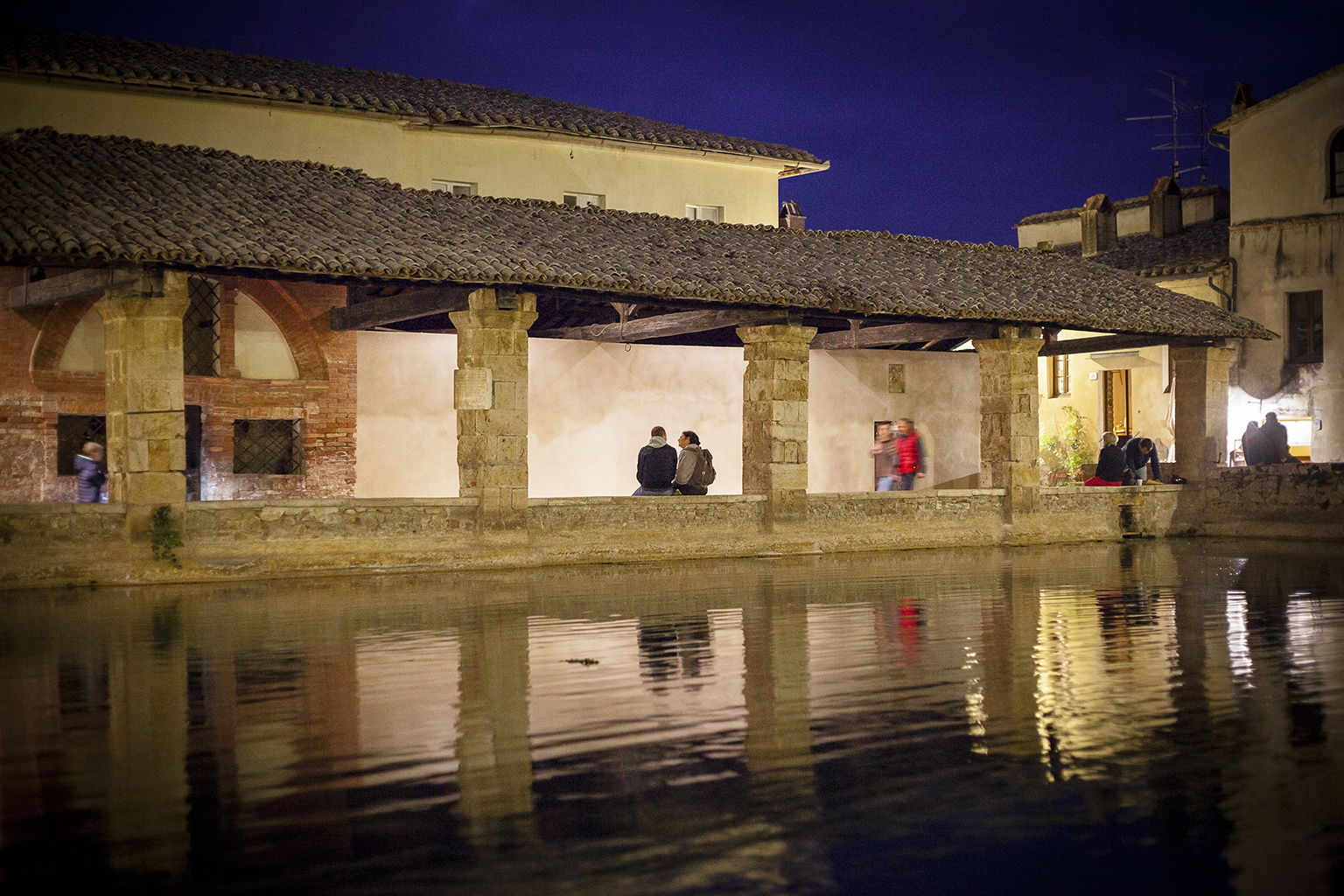 witnessed by famous persons who used to stay there and take the waters for their health. The Patron Saint of Italy, Caterina Benincasa, for whom the thermal structure is named, stayed there between 1362 and 1367, taken there by her mother who hoped to distract her from her religious vocation only to find the young girl used the boiling waters as a tool for penitence. Between 1459 and 1463, Pope Pius II commissioned the architect “Rossellino” to build Palazzo Piccolomini in Piazza delle Sorgenti next to the bath; the lower part of the façade was made in ashlared travertine and the upper part in smooth travertine while the third floor was added in the years after World War Two. In 1490, Lorenzo dei Medici frequented the baths often to cure his arthritis and subsequently in 1581, Michel de Montaigne mentioned a trip to Bagno Vignoni in his “Journals of Travelling Around Italy”. Today’s thermal structure has different characteristics to those described in the past; in fact the large bath in travertine blocks is 49 metres long by 29 metres wide and from it various sources gush including the most important one which is 52° C and supplies around twenty litres of water per second. The alkaline bicarbonate sulphate, hyper-thermal, earthy waters are still used today for wellbeing and in treating rheumatoid arthritis through water and mud therapies.