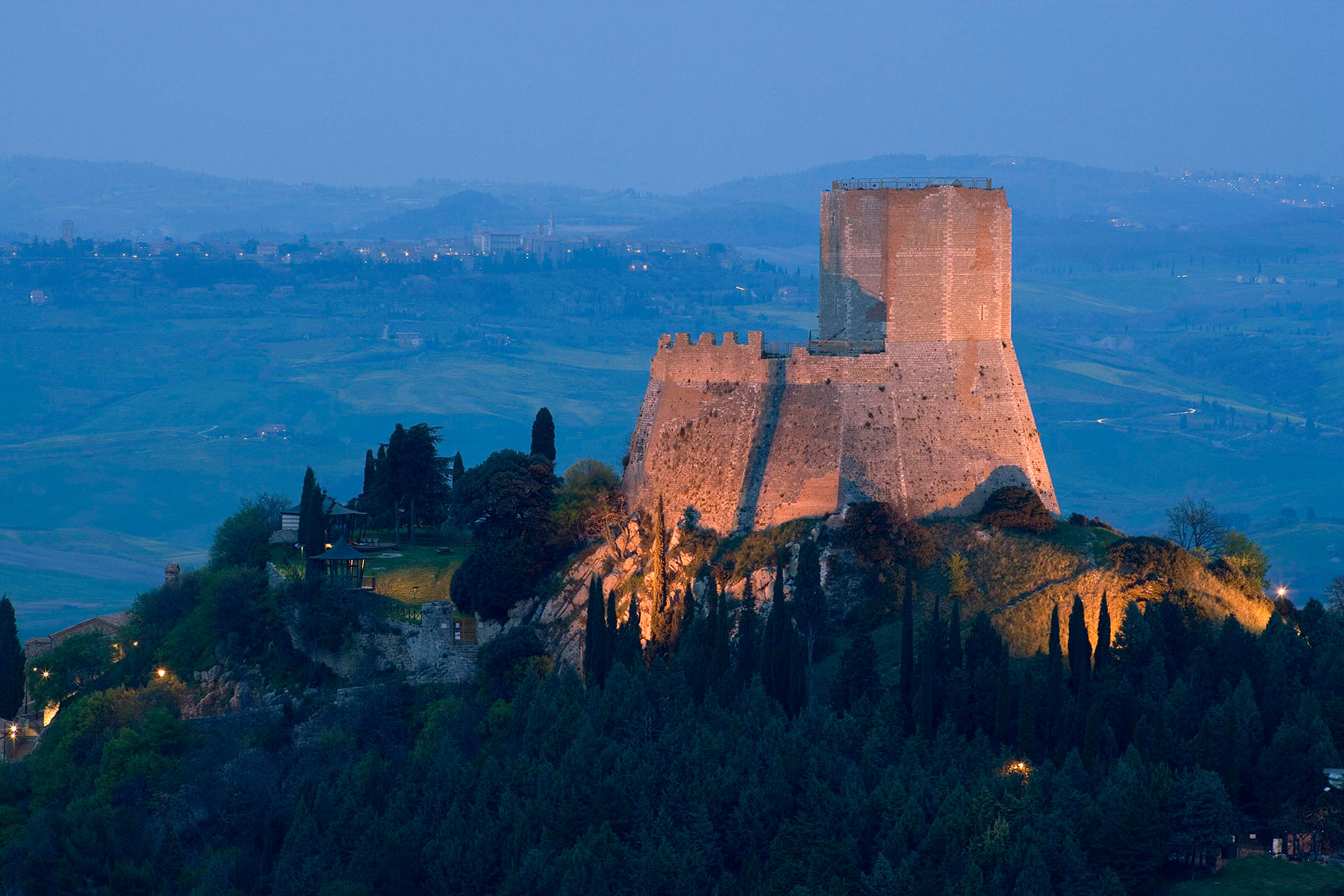 Set on top of a hill in a beautiful scenic setting, Castiglione d’Orcia is, as its name indicates, an ancient castle dominated by the ruins of the imposing Aldobrandeschi fortress. Designated with the name of Petra by medieval documents, it was governed by the Aldobrandeschi counts between the 11th and 13th cent.

It became a free commune in 1252, but was dominated by Siena becoming the center of rivalry between the Salimbeni and Sienese families. Thanks to its strategic position it became an important rampart along the Via Francigena so much so that interesting settlements connected to medieval pilgrimage.

Perched over the village is the castle area characterized by traces of brick walls part of a 17th century palace realized by marquise Riario from Bologna. In front of Castiglione d’Orcia, the Tentennano Fortress at the bottom there’s the Rocca d’Orcia village which has an architectonic structure with its medieval features still intact. 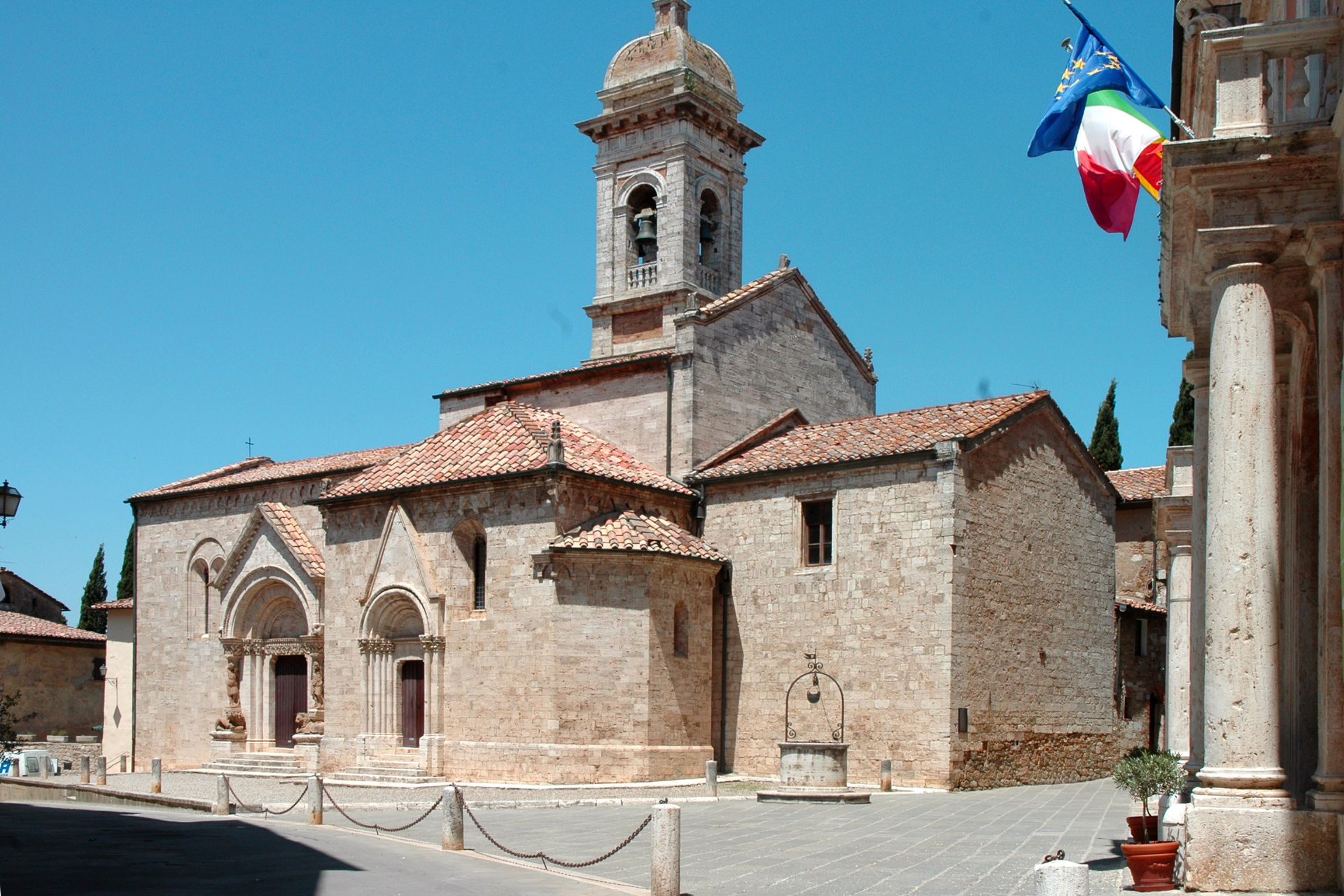 In the heart of the Val d’Orcia, lies the country of probable Etruscan origin, surrounded by a landscape that collects some of the icons that represent Tuscany and Italy in the world, such as the cypress grove, the Vitaleta Chapel and the hill Of the Belvedere farm.

The village rises on Via Francigena, witnessed by the presence of the Hospital of Scala, a place where hospitality was offered to pilgrims. The Collegiate Church and the Madonna Church, the remains of the Cassero Tower and the Horti Leonini, a typical sixteenth-century garden, are worth a visit.

To the south of San Quirico lies the hamlet of Bagno Vignoni, a spa known for its “water square”. Already in the Middle Ages Bagno Vignoni enjoyed great fame and illustrious characters as Santa Caterina and Lorenzo dei Medici stayed there. The Roman baths and the Mills Park overlook the panorama of the Val d’Orcia. In the dominant position on the panorama of the valley, stands the medieval fortress of Vignoni. 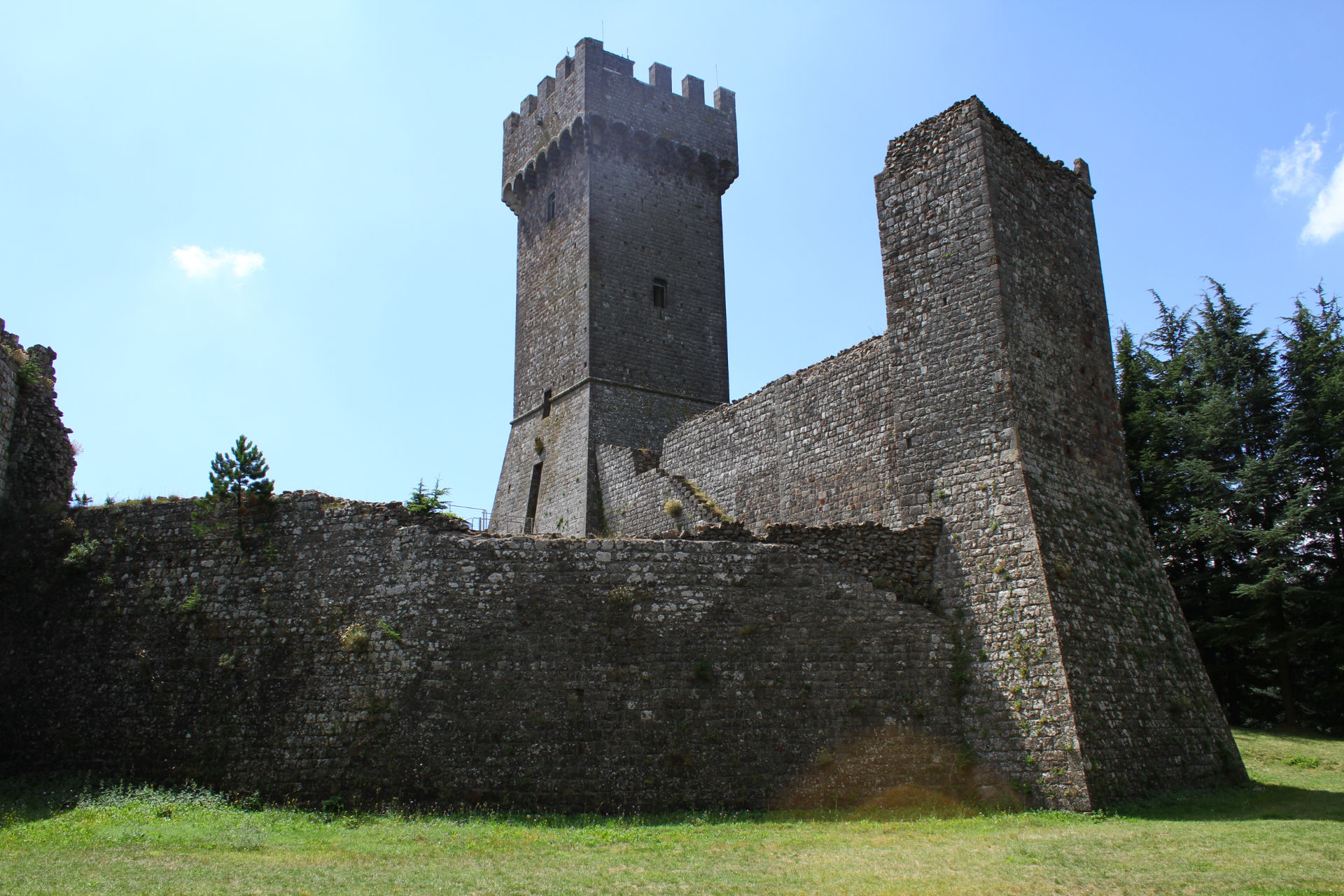 Radicofani is found at the base of an important basaltic crag of volcanic origin, crowned by ruins of an ancient fortress built in 1154 by Pope Adriano IV on top of Lombard fortifications which in turn had replaced an ancient worship era during the bronze age. Considered for centuries a mountain border between Tuscany and Latium, in 1198 its fortifications were expanded by Pope Innocenzo III.

Radicofani, together with the valley village of Callemala, was an important stopover and restoration area along the Via Francigena and in the territory of Radicofani there were seven hostels for pilgrims. Radicofani became the property of the Amiata Abbey of San Salvatore during the 11th century, later seigneurie and inaccessible shelter of the famous ghibellino mercenary leader Ghino di Tacco who used it for ventures which are celebrated by Dante Alighieri and Boccaccio.

It became a “castra specialia” for the important strategic position on the Via Francigena route or Romea and for administering justice. The Fortress of Radicofani with its imposing embattled tower which stands out in the distance, represents the most important monument in the village. 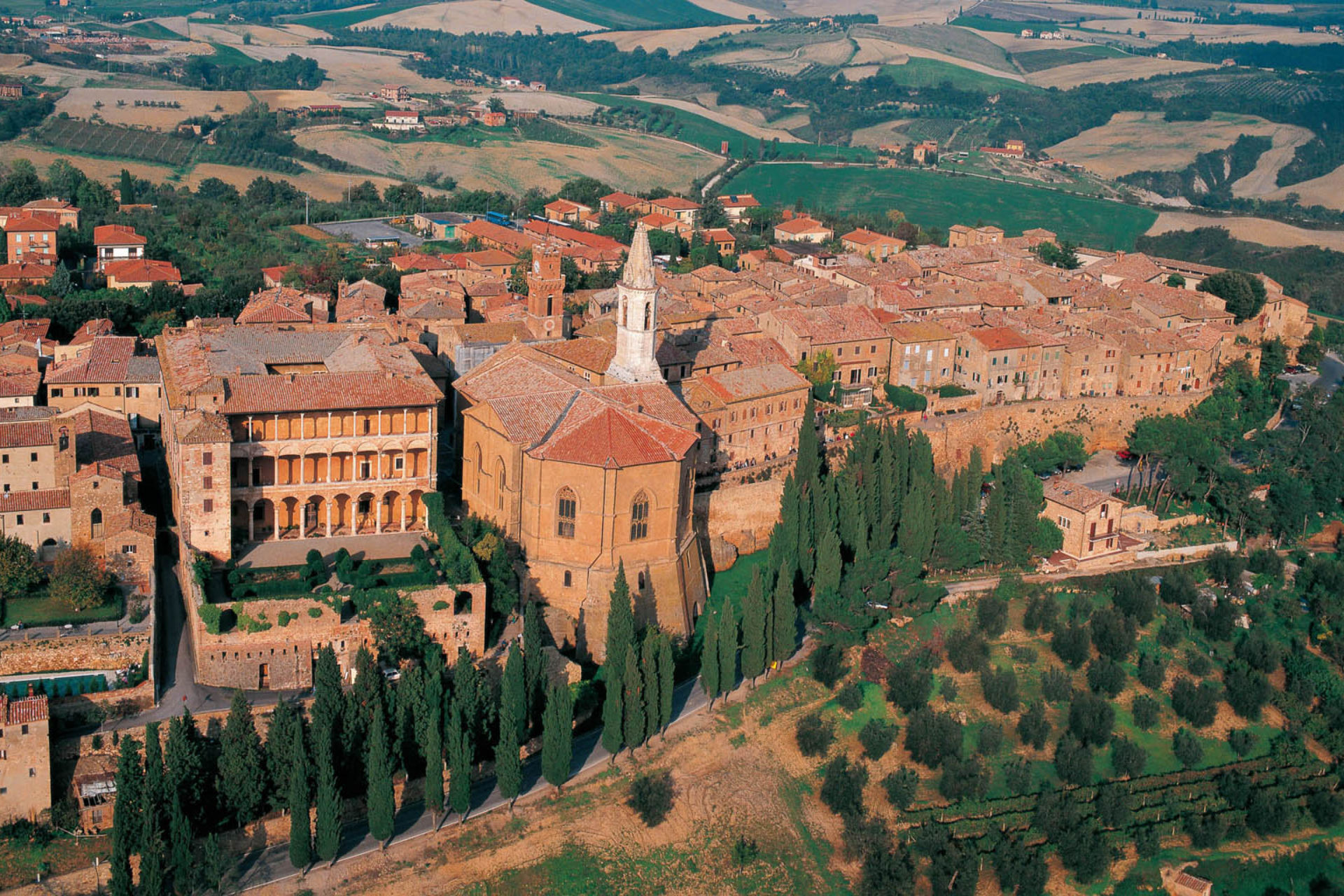 Placed on a hilltop at 491 m, the ideal Renaissance city draws its name from Pio II who wished for its creation. Enea Silvio Piccolomini became pope with the name of Pio II and he, in fact, decided to transform the native village of Corsignano, ancient fortified village, in a large residence. In 1459 he delegated the plan to the florentine architect Bernardo Gambarelli known as Il Rossellino follower of the great architect and theorist Leon Battista Alberti.

A rare example of urban planning was hence created, centered around the monumental proportions of the main square surrounded by its main buildings: the Cathedral, the Piccolomini Palace, the Bishop’s Palace, the City Hall. The architect also defined the main structure of the city, Corso Rossellino, the road which tied the two gates to Murello an Ciglio in the medieval village, where the imposing residences of the cardinals rapidly rose.

The heart of the “ideal city” is Piazza Pio II. The city still preserves its original style and is one of the most significant architectonic creations of the 14th century classical ideals. The historical center of Pienza has become part of the World Heritage in 1996. 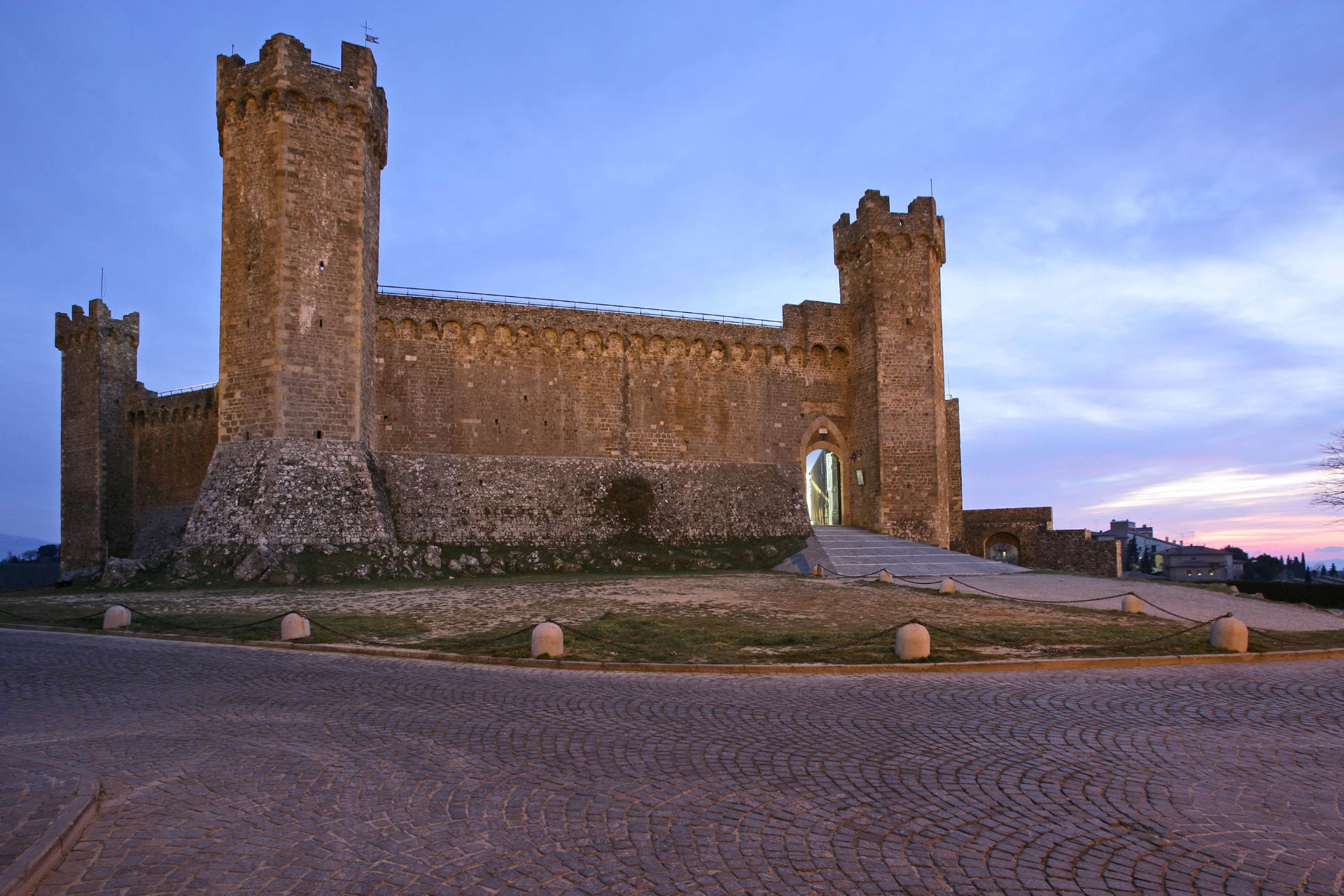 Placed on a high rise covered by olive groves and vineyards overlooking the valleys dell’Ombrone dell’Orcia and dell’Asso, Montalcino reveals a late Middle Ages city plan. The name of the city derives from the latin “Mons Ilicinus” holm-oak mountain, as it appears from the town council coat of arms with a holm-oak at the top of the six hills.

It was inhabited during the Etruscan era (as proven by the finds at Poggio della Civitella) and the Roman; in the year 814 it was donated by Ludovico il Pio to the Sant’Antimo Abbey and then became a free commune. Contended by Florence and Siena it fell under the dominion of Siena after the battle of Montaperti in 1260 and in 1361 the Sienese built a fortress rendering it a defensive stronghold of the Republic.

This important role, as a defensive rampart of the Sienese Republic, can be seen in the imposing fortress, but the dwelling is characterized by medieval and renaissance monuments and just like Siena, Montalcino too is subdivided into “terzieri” districts.